“These neighborhoods are our neighborhoods and these children are our children.” President Obama in statement made following the recent Sandy Hook Elementary School Massacre killing 20 children and 6 adults in the school.

Where do Americans stand on gun laws? Gun control?

After the shooting in the movie theater in Aurora, Colorado, 76% said, “There should be some restriction on owning guns,” according to a CNN/ORC poll.

At present time, roughly half of American states allow gun owners to carry their weapon openly into public places.

Also, making more news recently is the “Stand Your Ground” law. This law really came into the public eye during the Trayvon Martin case in Florida.

There are a host of other states with very similar laws.

Florida, as well as others in this list do not have a “duty to retreat” clause which means if you can get away without harm or deadly force but shoot anyway, you can be prosecuted. Most of the states with the “Stand Your Ground” law do not have the “duty to retreat” clause. Many of these laws are written in a vague way leaving the law to be used as a “blanket way out” for many shootings.

These laws were often introduced as a way to help “victims” in cases such as domestic violence where victims often felt blocked and unable to flee or ended up shooting their attackers (which happened to be their domestic partner) and found it near impossible to defend themselves in court. When was it okay to kill someone under your own roof?

But, the law has left it open for arguments leading escalating, turning into assaults and then murder to be defended under the “Stand Your Ground” law. What would have been different if a person hadn’t had a firearm on them? What if they didn’t feel it was okay to cry “self-defense” in what would typically end up in an assault and battery case but instead, someone is dead. Has the law been a positive or a negative? Who has it actually helped more?

Guns and politics have become so entwined as the NRA has become more involved through the years with politics, legislation and politicians.

The NRA runs ads campaigning for those who promote their cause and against those standing in the way of their proposed changes in existing laws or future goals.

By funding politicians, their campaigns and having their own people in Washington, the NRA is assured of having a way to get current policies changed or new legislation passed, changed or set aside. The problem is much of this happens without knowledge of the general public both through state government and federal government.

NRA does not run the US government and does not make the choices for what is good for America. That is done through the voters. We vote who we want at both the state level and the national level. Are we listening to what these politicians are standing for and against? Who is supporting them and funding their campaigns? What are their intentions?

Ask yourself why the NRA has had nothing to say since this most recent massacre? Statements have come out from all over the world. World leaders are offering condolences. Many actors and actresses are coming forward and saying things should be done with violence in movies and TV may need to be looked at. Networks rearranged TV schedules following the massacre due to programming that may have been viewed as showing things in bad taste.

Sunday morning talk shows have done numerous interviews and Meet the Press asked any of 31 pro-gun senators to appear but none responded. Silence speaks volumes.

Using the words “gun control” is beginning to sound UN-American. I think doing nothing as we are seeing more massacres, people crying in disbelief as their loved ones are being identified, going through autopsies and realizing their last conversation was their LAST conversation… that is UN-American.

Personally, I can’t participate in ignoring an issue that is continuously being swept under the rug by groups that argue for their freedoms while others are losing their loved ones, their lives and their future or their sense of security. What about their freedom, our freedom?

Weapons used for hunting and sporting do not call for assault weapons or weapons with large magazines that can gun down numerous people (or animals) in just seconds or minutes.

Many assault weapons are not for either of these uses and are only used to promote keeping an argument going instead of coming to an agreement.

Responsible and legitimate gun owners, politicians and people across America need to give pause to this, put politics aside and be able to really look at this very serious issue, discuss it (peacefully) and deal with it.

A major argument is that responsible gun owners and legally purchased guns are not the problem.

My second response is that is not true. Legally purchased guns end up in the wrong hands more often than these “responsible gun owners” must realize. The ability to purchase guns is far too easy in far too many places. There needs to be universal laws when it comes to background checks, waiting periods, guns and ammo purchases and an assault weapon ban.

My third response is this. ”Responsible gun owners” do not come with a magic chip in them saying they are responsible, will keep their weapons locked up properly, only use their weapon in the absolute necessity that it is needed and will be in 100% tip top emotional and mental condition for the rest of their life. They also don’t have the promise no one in their family won’t get to their weapons or someone breaking into their home won’t be able to do the same. There are no guarantees.

The NRA makes it seem as though guns are the answer to protection and the government and its laws are trying to take that away from people.

For those trying to hide behind the 2nd amendment, they aren’t the ones who control this discussion. The idea however of more guns being the answer has proven to be wrong, dead wrong.

This is a must read article by:  Mother Jones, “More guns, more mass shootings – coincidence?” Their team put together a lot of facts about guns, violent crimes, laws and changes through a lot of investigating on their part. I urge you to look at the numbers.

Also, looking at some graphs put together by Simon Rogers with the Guardian, America is well armed compared to other societies around the world (88 per 100) and our gun violence speaks for approximately 60% of all homicides.

Another argument is not only guns take lives.

True. It isn’t just a weapon that ends a life. It is a person who believes they have a justified reason to do so.

As humans we react many times out of emotion. In many of these cases, there are feelings of anger, hate, revenge, defeat, entrapment and many times nobody knows what set a person off to commit such violent crimes.

The right thing to do, if a person is thinking rationally is to walk away, take some time to think things over, seek some advice or maybe get more details. A lot of times people are going through situations where counseling is needed and has been needed but either they didn’t know it, didn’t seek it or it wasn’t available.

Too often, a gun is too easily available to pick up, steal or purchase.

Not everyone committing these horrible murders/suicides, massacres and violent crimes were “monsters” before these acts. Many times, no one noticed any signs of behavior change, isolation, depression or signs of mental illness. Other times, it was noticed but they were unable to get help or convince the person to get help.

Does that mean people with emotional or mental illnesses are “monsters”? No. It means people with problems need to be able to seek help, get the proper diagnosis, counseling, medications and not be labeled with a stigma as being “crazy”.

If a person in need of help seeks help and receives help, this is definitely not “crazy”. That is the right thing to do and it should definitely be available to anyone in need of these services.

Many people with emotional and mental illnesses can live fulfilling lives alongside everyone else if they are able to get the medical and emotional help necessary. This important issue in our society cannot continue to be ignored. This is a huge gap in our healthcare system leading to economic and many other life issues. It is easier for Americans to access guns than mental health care. Without truly dealing with this, we can’t move forward on dealing with these murder/suicides, massacres and violent crimes.

There are two sides to be focused on immediately without involving political favors, campaigning, lobbyist and self-promotions.

2)      Not enough available care and treatments for those with emotional and mental needs and disabilities.

For those who can’t clearly see these needs, they aren’t focusing on the real problems. They are standing in the way of what needs to lead to a drastic change.

We can’t just cover the cracks or kick the can down the road.

Our biggest war is going on here at home and our children and loved ones are the victims.

What is the difference between these recent massacres and 9/11? We are part of the blame. We vote. We have voices and if the issue isn’t being addressed, keep pursuing the issues.

These victims didn’t have a choice and now their voices have been silenced.

This is our country, our communities and our neighborhoods. Those teachers are our teachers and those children are our children.

Must see video below: 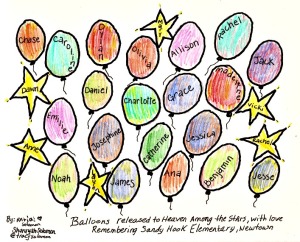